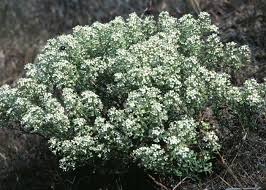 On Friday April 6, 2007 Western Watersheds filed litigation in federal district court against the U.S. Fish and Wildlife Service over its continued refusal to protect Slickspot peppergrass â€“ a rare desert flower found only in southern Idaho â€“ under the Endangered Species Act.

“At the end of the day, we want to see science â€“ and not politics â€“ control the Service’s listing decisions,â€ said Todd C. Tucci, attorney for Advocates for the West who represents Western Watersheds. “Unfortunately, Secretary Kempthorne has proven as incapable of faithfully applying the ESA as his predecessor.â€

“We should not be surprised that Secretary Kempthorne is quietly weakening the Endangered Species Act,â€ said Jon Marvel, executive director of Western Watersheds Project. “One of his primary goals since the mid-1990s has been to undermine the Act, and make it more difficult to protect our natural heritage.â€

Slickspot peppergrass (Lepidium papilliferum) is a native desert flower, found only in small parts of southern Idaho. As its name suggests, this flower grows only where puddles or small pools form after rains or snow, and then dry up in the arid climate. Populations of this rare desert flower have been reduced to approximately 100 acres. The primary threats to this flower are livestock trampling and grazing, off-road vehicles, and agriculture developments.

The U.S. Fish and Wildlife Service has known since 1990 that this species warrants protection under the ESA. In 2000, 2002, 2003 and in 2006, experts within the U.S. Fish and Wildlife proposed to protect this species under the Endangered Species Act. And each time, the political appointees within the Bush Administration discarded the scientific evidence, and rejected the recommendations.

“The Secretary and the Service cannot be trusted in making the right decision here,â€ said Katie Fite, Biodiversity Director with WWP. “We need to ask the Court to order Secretary Kempthorne to protect Slickspot peppergrass, anything less will ensure extinction.â€