Death by a Million Hooves: Failing Our Public Lands 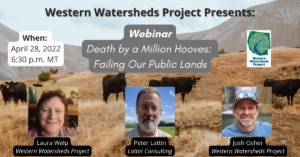 Death by a Million Hooves: Failing Our Public Lands

Watch the recorded Webinar Below!

Join WWP for this important webinar where we will be exploring the Bureau of Land Management’s land health standard practices, national policy implications and agency failures to adequately address issues on the ground where ecological function and sensitive wildlife have been compromised. Land Health Standards (LHS) are a set of protocols for measuring and documenting the health of riparian areas, flora, fauna and soils on public lands. Nearly 50% of Bureau grazing allotments are failing their own standards. Of the lands that are failing to meet LHS, the agency found that in 72% of cases livestock was a causal factor.

Description: BLM Standards for Rangeland Health were instituted under Secretary of the Interior Bruce Babbitt in 1993 in response to widespread rangeland deterioration throughout the West. Each State Office was required to set desired conditions for healthy soils, hydrology, vegetation, and water quality. The BLM designed a protocol for quickly and qualititatively measuring those four components of rangeland health on a site and then determining if the Standards were being met. If a site was failing any of them, the BLM was required to make changes to improve conditions. This information was also intended to inform the NEPA process when grazing permits were renewed. When the Grand Staircase-Escalante National Monument was designated, scientists in multiple disciplines were hired to conduct a rangeland health survey of the new Monument. Over 500 sites were assessed as part of the information-gathering process for writing a science-based grazing management plan. In addition, supplemental data was collected on soil stability and vegetation cover. The data showed that lightly grazed sites were typically healthier than those with heavier utilization, and sagebrush grasslands in drainage bottoms were in poor condition. Non-native seedings, which concentrate livestock and are typically overused, had the lowest rangeland health scores. Ultimately, however, no grazing plan was ever written based on these data. GSENM managers realized that if they delayed the production of a new plan, permittees could continue grazing the way they always had in the past. There were no consequences for failing to act. Political considerations continue to be the primary influence on GSENM grazing management to this day.

Description: The land health records reviewed in this presentation represent the most complete look at the impacts of livestock grazing on 155 million acres managed by BLM. These data were provided by the agency in response to three FOIA requests between 2008 and 2020. The data had to be compiled outside the agency because unlike other allotment information, BLM has chosen not to maintain these critical land health evaluation records in a formal database themselves. I will review (1) important findings and the significance of livestock grazing on land health across broad spatial scales, and (2) what the data themselves reveal about the agency’s land health evaluation program management since 1997 when the Federal regulations went into effect. It is clear that the agency has not been able to keep up within the timeframe requirement to conduct formal land health evaluations, nor are they likely to in the decades to come without an implementation of a rapid screening approach to identify allotments that clearly fail to meet land health standards. In addition, I will relay findings and recommendations that the Public Employees for Environmental Responsibility (PEER) and I had an opportunity to share with Director Tracy Stone-Manning, Deputy Director of Policy and Planning Nada Wolff Culver, and others. Lastly, a brief introduction will be provided to PEER’s BLM Rangeland Health Geospatial Data Portal, developed to provide the public an opportunity to explore, query, and download BLM’s land health records and other relevant spatial datasets. RHS Fact Sheet RHS Story Map

Presentation Title: The Policy and Politics of Rangeland Health: How to Reform the BLM’s Range Program and Restore Public Lands

Description: After nearly a century of public policy designed to halt and reverse the damage caused to federal public lands by domestic livestock grazing, it is time to look beyond the mechanisms of monitoring and Rangeland Health Standards to understand why so little progress has been made. In the face of our changing climate and the new normal of a hotter and drier American West, we are at a pivotal point where continued inaction and a “see no evil” approach to grazing will have lasting environmental consequences. The BLM is required by law to manage public lands in a manner that will protect them from ecological harm yet has clearly failed to do so. Instead, the agency prioritizes extractive uses such as grazing while hiding behind the banner of multiple use. What the BLM needs now is a complete reboot, including a renewed focus on conservation, a significant increase in scientific capacity and professional staff, and accountability measures both at the national and local level.

Join Us In Person!