January 6th: From Standoff to Siege and Back Again

Today marks the one-year anniversary of the ignoble assault on our nation’s Capitol Building and, indeed, an assault on U.S. democracy itself, as thousands of rioting protestors sought to overturn the free and fair election that would usher Sen. Joe Biden into the Presidency later that same month. With the encouragement of then-President Trump, the hordes descended on the capital, terrorized law enforcement officers and the press, threatened members of Congress and their staff, and created a new sense of destabilization among the elected officials in Washington, D.C. But it all started with insurrections out West, on a smaller scale, led by anti-federalist ranchers and their self-styled militia allies toting assault rifles.

As Western Watersheds Project and others said at the time, the siege of the Capitol was unprecedented but unsurprising. A former senior domestic terrorism analyst described it as “A straight line that you can draw” between Jan. 6, 2021 and the 2014 standoff at the Bundy Ranch. To those of us who have been watching the uprising of anti-government sentiment play out on public lands in the West, the trajectory was painfully clear. The same “Don’t Tread on Me” flags waving on the national mall had been flying from flagpoles in rural towns, and were trademarks of both the occupation of the Malheur National Wildlife Refuge in 2016 and the standoff at the Bundy Ranch in Bunkerville in 2014. 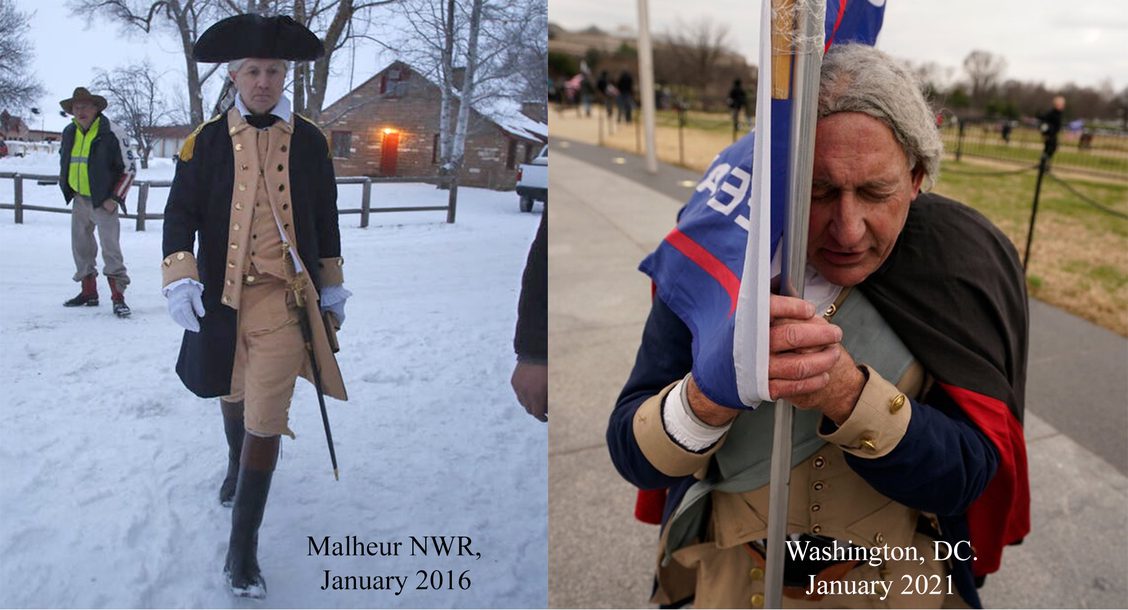 The resistance to, and resentment of, the government’s nominal protection and management of federally-managed lands from private exploitation by grazing has been a ‘thing’ in the West since the Taylor Grazing Act took the public land out of the hands of the cattle industry. Though certainly not the only – or most extreme – example of white supremacists laying claim to lands that don’t belong to them, public lands ranchers and the January 6 insurrectionists have the same sense of entitlement about having the government run in accordance with their beliefs and for their benefit.

While the news coverage of last year’s events will likely focus on the ongoing Congressional investigation, we at Western Watersheds Project are keenly aware that this kind of rebellion is still alive and well in many of the states where we work. From trespassing sheep in Nevada, to trespassing cattle left to freeze to death, to illegal endangered wolf killing by a New Mexico rancher, the livestock industry’s contempt for law and order – and the government’s unwillingness to take action – is on full display. The land management agencies are still being ‘cowed’ by threats of violence from anti-government agitators; Cliven Bundy’s cows are still trespassing on the Gold Butte National Monument decades past their legally-mandated removal.

As the January 6th committee moves forward in investigating the sequence of events leading up to the 2021 insurrection, we sincerely hope some attention is turned to the ongoing rebellions negatively affecting wildlife and publicly-managed lands in the West. These are the spot fires of a smoldering anti-government, anti-democracy sentiment that must be fully addressed if we’re going to meaningfully combat the climate and extinction crises and implement smart and just policies to protect ecosystems for future generations.